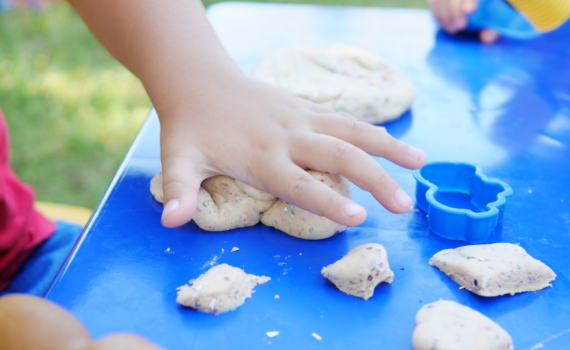 Brief Report: Parent Perspectives on Sensory-Based Interventions for Children with Autism Spectrum Disorder
Sensory-Based Interventions (SBIs) are treatments that use sensory tools to address behavioral challenges in children with autism spectrum disorders (ASD). SBIs work to help children process and recognize environmental stimuli. In this study, researchers interviewed 152 parents of children with ASD and collected data on the families’ use of SBIs along with their views on the importance and helpfulness of the tools they used. The most commonly used SBIs included massage, trampoline, joint compressions and brushing, weighted backpack, and oral-motor tools. When asked about the importance of SBIs, approximately 75% of parents said that they were important or very important. In addition, 53.3% said SBIs were helpful in addressing challenging behaviors in their child. The results of this study are useful in identifying parents’ perspectives on which equipment or tools have shown to be most beneficial for their children with ASD. Many parents request the use of SBIs, therefore knowing which are most accessible and beneficial can help clinicians, therapists, and parents work SBI’s into the children’s treatment.

The Longitudinal Effects of Parenting on Adaptive Behavior in Children with Fragile X Syndrome
Studies suggest that children with Fragile X syndrome (FXS) often have a decline in their adaptive behavior skills beginning in middle childhood. Researchers at the University of Kansas measured the maternal responsivity in parents of children with FXS to analyze the effect it has on their children’s adaptive behavior. Maternal responsivity is a parenting method involving “warmth, nurturance, and stability,” along with positive responses to children. This study focused on certain behaviors such as “commenting on their child’s behavior and/or focus of attention, requesting a verbal response, and recoding and/or expanding a child’s previous response.” Maternal responsivity was measured using observation.

Group-Based Social Skills Training with Play for Children on the Autism Spectrum.
Social Skills Training (SST) has been shown to be a helpful intervention for improving social skills in children with autism spectrum disorders (ASD). Using an eight-week SST treatment program, researchers examined the effects of play within SST by providing semi-structured playtime and unstructured playtime. Forty-five children with ASD aged 8 to 12 years old were assigned to one of three treatment groups: a group of SST with unstructured play, a group of SST with semi-structured play, and a waitlist control group. Teacher and parent observation reports were both used to provide more accurate data. The two groups of children receiving SST showed clinical improvements in social skills and social competency compared to the control group. The children in the semi-structured playgroup made the most significant gains in social skills and social competence compared to the two other groups. The results of this study suggest using SST can be a beneficial treatment for strengthening social skills and social competency in children with ASD.