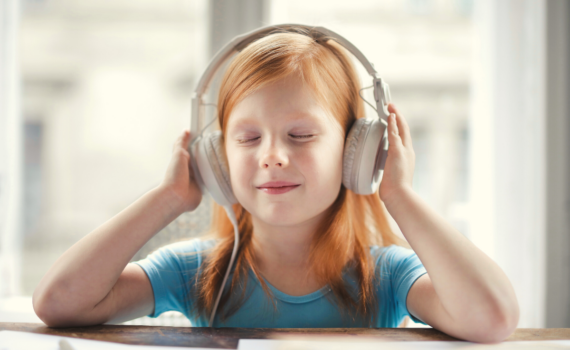 Melatonin may ease autistic children’s sleep troubles
Children with autism often have difficulties falling asleep and staying asleep. This study by Beth Malow at Vanderbilt University looked into the safety of melatonin, an over-the-counter supplement used as a sleep aid. Eighty children aged 2-17 years, most of which had autism and a few with Smith-Magnesis syndrome, took a slow-release form of melatonin called PedPRM for 91 weeks with the option to increase the dosage if needed. The children had significant improvements in sleep and quality of life. Researchers also found that PedPRM did not delay puberty for these children, which was an initial concern due to the melatonin hormone. This study shows that melatonin can be a safe and helpful way for children with autism to get a good night’s sleep, which can also lead to improvements in general quality of life.

Expressive language development in adolescents with Down syndrome and fragile X syndrome: change over time and the role of family-related factors.
Down syndrome (DS) and fragile X syndrome (FXS) often coincide with early language difficulties. Researchers at the MIND Institute in California were interested in finding out how expressive language changes over time, and whether or not those changes are syndrome specific. The expressive language skills of 57 adolescent males with intellectual disabilities (20 DS and 37 FXS) were analyzed. Family-related predictors such as maternal IQ, maternal psychological distress, closeness of the mother-child relationship, maternal and paternal level of education, and family income were also analyzed to see the roles they played in predicting expressive language.
Over the span of three years, adolescents with DS and FXS had increased in talkativeness but decreased in amount of words spoken and complexity. The participants with FXS displayed a greater increase in talkativeness than those with DS. In addition, participants whose mothers had a college education displayed greater talkativeness over time compared to those whose mothers had a high school education. This research could benefit children by helping clinicians identify the strengths and weaknesses in expressive language in children with DS and FXS, as well as help treat the children in the areas they could improve such as number of words spoken and their complexity. 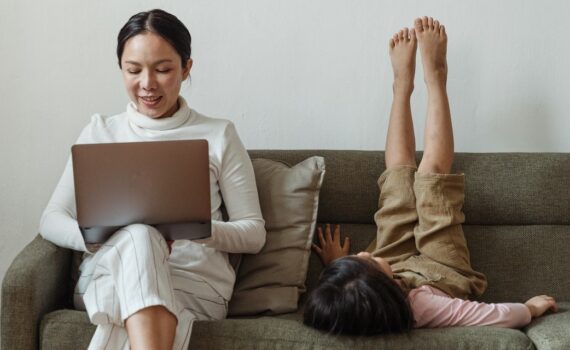 Utilizing Two-Tiered Screening for Early Detection of Autism Spectrum Disorder
In the primary care setting, many physicians use a parent questionnaire called the Modified Checklist for Autism in Toddlers (M-CHAT-R/F) as an initial screener for ASD. However, problems exist with the M-CHAT-R/F and other early screeners as they produce a high false positive rate for ASD, resulting in lengthened waiting lists for comprehensive evaluations and delayed interventions for children. This study measured the effectiveness of combining a level one screener, the M-CHAT-R/F, with a level two screener, the Screening Tool for Autism in Toddlers & Young Children (STAT), with the purpose of separating children at risk for ASD from those at risk for other developmental concerns. This would allow those at risk for ASD to receive diagnostic evaluations and interventions sooner. Results using the two-tiered approach in a sample of 109 toddlers were promising. They found that the rate of false positives decreased, sensitivity of the tests was improved, and identification of true positives was not adversely affected. These results suggest that referrals for ASD services can be streamlined, lowering the age of diagnosis and providing access to interventions earlier.

Improving Early Identification and Intervention for Children at Risk for Autism Spectrum Disorder
Challenges exist for many state-run systems in early identification of ASD. To combat these foundational, statewide issues in South Carolina (SC), researchers developed the South Carolina Act Early Team (SCAET). Under existing policies in SC, children deemed to be at risk using screening measures could only access intervention services with a formal diagnosis of ASD. The SCAET piloted policy changes to use a two-tiered screening process, including the M-CHAT and STAT, two parent-report questionnaires. Additionally, under this updated policy, children under the age of 3 found to be at risk using the two screening measures were provided the BabyNet Early Intensive Behavioral Intervention (EIBI) without a diagnosis of ASD. The implementation of presumptive eligibility rather than a formal diagnosis produced a fivefold increase of children who were eligible for EIBI, saving families years of waiting for an ASD diagnosis and earlier access to interventions. Through this study, the SCAET increased collaboration and efforts among services and leaders in SC, was able to improve early identification, and provided a successful policy that can be replicated in other states.

A Statewide Tiered System for Screening and Diagnosis of Autism Spectrum Disorder
Creating effective systems of ASD screening to lead to interventions is a public health priority, particularly in underserved areas with a greater need for these services and an overall lack of access to care. Indiana fell behind in developmental screenings for children nationally and was in need of a screening and diagnosis system due to a higher number of children with developmental disorders. Researchers created the statewide Early Autism Evaluation (EAE) Hub system comprised of three tiers: 1) children receive screening measures in a primary care setting; 2) 18 – 48 month old children who are found to be at risk for ASD are referred to the EAE Hub for further evaluation; and 3) children with severe or atypical clinical presentation are referred for thorough evaluations at a specialty diagnostic center. The results concluded that the average age at evaluation was 30 months, considerably lower than the national average of 4-5 years. The average wait time for the EAE Hub evaluation was 62 days, drastically different from the statewide average of 9-12 months. This system was widely successful in serving a disadvantaged area and has implications for use beyond Indiana in states facing similar issues. 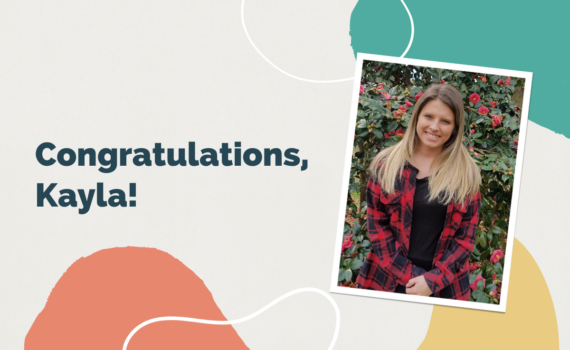 Research specialist Kayla Jarvis has been accepted to the Doctor of Occupational Therapy (OTD) program at Presbyterian College! After joining the NDD Lab in January 2019, Kayla began working with infants and children with Down syndrome and fragile X syndrome. Through this work, she developed an interest in early intervention and its effects on motor skills. Kayla decided to pursue a career in occupational therapy and spent the last year shadowing occupational therapists in a variety of settings. She will start the OTD program in January 2021. Congrats, Kayla! 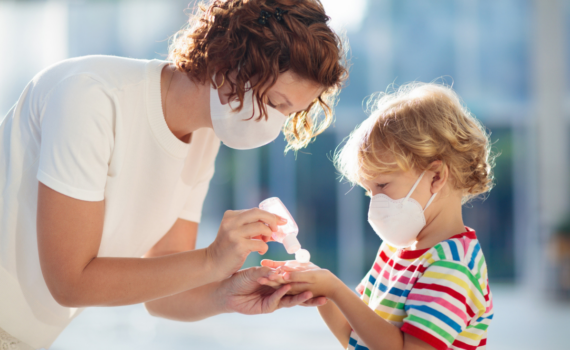 In response to the COVID-19 pandemic, many researchers and organizations are offering free resources to help families. Below we share some of the resources we’ve come across.

Social Stories
Social stories can be a very useful tool for all children because they help prepare them for what to expect in unfamiliar situations. The free stories listed on the link above cover COVID-19 and schools, but the author also has stories such as “When Can I Stop Wearing A Mask?” and “Getting a Haircut During COVID-19”.

Toolkit: “Supporting Individuals with Autism through Uncertain Times”
Researchers at UNC Chapel Hill worked with teachers, parents, and experts from various fields to develop a comprehensive guide for those who may feel unequipped to manage the changes brought on by the pandemic. Many of the resources are fully customizable to meet the individual needs of children with ASD and their family members.

Free Parent Workshops, Webinars, and Other Educational Resources
The Vanderbilt Kennedy Center has a variety of free educational resources available to families of children with autism.

Autism Research Study: Regulating Together
Cincinnati Children’s is conducting a research study that can be completed at home to test the effectiveness of an ASD treatment program called Regulating Together in people diagnosed with ASD and emotion regulation difficulties. The program is for children and teens 8 to 18 years old with ASD and their caregiver(s).

Pandemic Parenting
Pandemic Parenting is a collaboration between two psychologists, scholars, and moms committed to sharing their expertise and research in ways that are immediately accessible and useful to families. 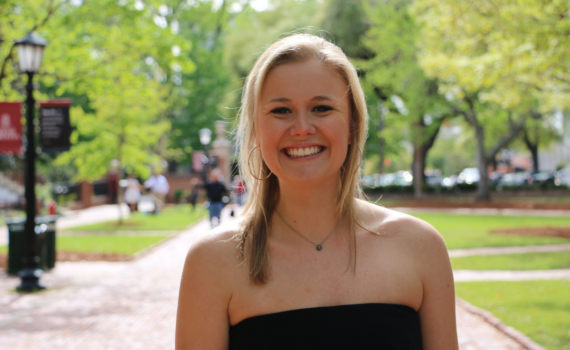 We are excited to share that research specialist Chandler Knott will stay on in the lab as a doctoral student in the School Psychology program! Chandler first joined the lab as an undergraduate research assistant. After receiving her B.S. in Experimental Psychology from UofSC in 2017, she was hired as a full-time research specialist in the lab. She quickly developed a rapport with participants and became a valuable member of the assessment team. As lead research specialist, she trained new lab members on multiple measures and took on additional responsibilities during staff transitions. Her acceptance to the School Psychology program was no surprise to those who work with her, and we’re thrilled that she’s chosen to embark on this next stage of her career as a member of the NDD Lab! 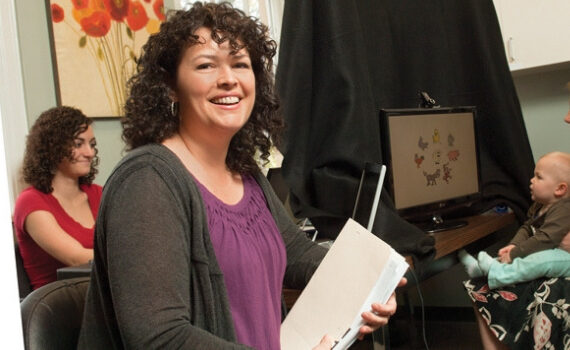 Dr. Jane Roberts is one of two professors named as 2020 recipients of the Carolina Distinguished Professorship, one of the highest honors awarded to South Carolina faculty! The position honors professors who show excellence in scholarship, a commitment to students and their colleagues and overall participation in the life of the university.

You can read the full story here.

Please join us in congratulating our amazing PI on this outstanding achievement! 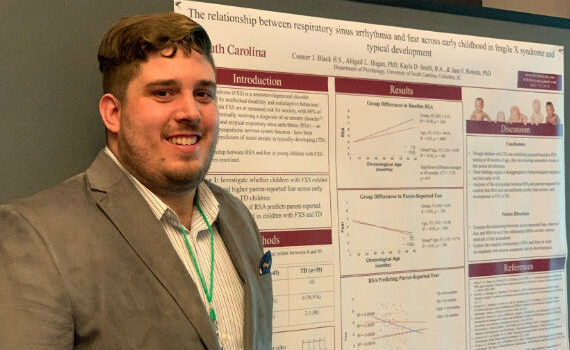 Conner Black, a doctoral student in the NDD Lab, was recently awarded a grant from the USC Office of the Vice President for Research. The Support to Promote Advancement of Research and Creativity (SPARC) Graduate Research Grant is a merit-based award designed to ignite research and creative excellence across all disciplines at the University of South Carolina. Conner’s project, “Biological Mechanisms Related to Social Anxiety in Young Children with Fragile X Syndrome,” will allow us to extend our recruitment of EEG research. 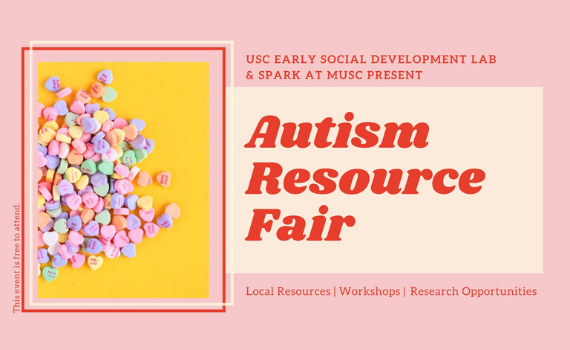 The USC Early Social Development Lab and SPARK at MUSC are hosting an autism research and resource fair on February 15 at the USC Columbia campus! This free event will include research study opportunities such as SPARK enrollments and parent workshops on Toilet Training, Teaching Requests: Strategies to Improve Communication, and Social Skills/Executive Function. Representatives from local autism organizations will be onsite hosting activities for kids and talking about their services with the community. Childcare will also be available.

We’ll have a table at this event, so we hope to see you there!

For more information and to register for workshops, click here. 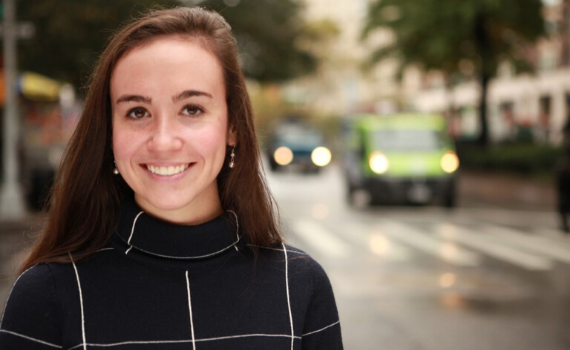 We’re excited to introduce a new graduate student in our lab, Erin Hunt! Erin joined our team back in August and is currently a first year student in the Clinical Community Psychology program at UofSC.

Erin completed a B.S. in Cognitive Neuroscience with a minor in Chemistry from Fordham University in 2017. Throughout her undergraduate career, she worked in the Fordham Memory and Aging Lab as a research assistant and completed a senior thesis examining the effects of menstrual cycle phase on cognition and autobiographical memory. After graduation, Erin completed a two-year research assistantship at the Child Mind Institute’s Healthy Brain Network, a community-based research program aiming to identify biomarkers underlying mental health and learning disorders in children and adolescents. Her current research interests include exploring developmental trajectories of neurocognitive abilities, such as inhibitory control, in relation to maladaptive outcomes in both typically developing children and children with neurodevelopmental disorders. 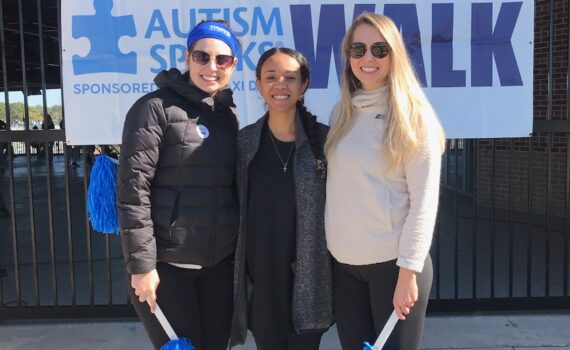 We were so excited to participate in the inaugural Columbia Autism Speaks Walk on November 10! We were joined by several other labs at USC that are currently recruiting participants for autism research.

You can learn more about research opportunities related to autism here: https://www.facebook.com/pg/SCAutismResearch